Tiny steps of improvement for Okaasan - the very ill/sick/frail - you take and glory in what you can.

Dear Son got called into the hospital on Friday. Okaasan had lost another tooth, and he was allowed to visit her for a short time.

She was prone in bed, the feeding port fitted and she wears mittens to stop her fiddling with the tubes.

But she smiled up at him when he talked to her and seemed...as content as you she could be in this situation.

The nurse said that the day before she had said "Good morning" - which was the first time they'd heard her speak.

And so it goes. Maybe they will keep her at this hospital for a few more weeks, then a transfer back to the hospital unit of her care home...and then....the search for a more permanent place. 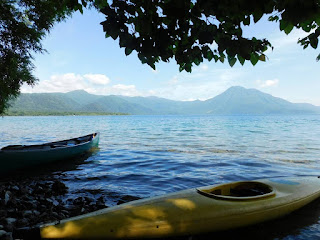 have some Hokkaido calm....
In other news, a letter came from the company next door to Okaasan's house near Tokyo. The house itself is ok, but the garden is getting very overgrown and plants are sticking out in the road and into their land. Can we do something about it?
They sent photos and even recommended a local gardening company and their price for trimming it all back. Maybe it's an old school mate of the company president :-)
Anyway, of course something to fix. An old empty house for years doesn't look good for the neighborhood. Luckily in the Tokyo suburbs it's only overgrown garden to worry about - here in north Japan empty buildings and their snow accumulation cause big problems.
It was funny to look at the photographs of the old house. I think I only went there once or twice, when we attended the memorial ceremony for Dear Son's dad, and I was introduced to the family. In those days, maybe 20 years ago, Okaasan was living independently but already not cooking so much for herself and letting the housework slip. Dear Brother-in-law was still alive and working/drinking for his business.
So.
Summer 2021. Olympics starts in Tokyo, and elsewhere, next weekend. Here in Hokkaido there will be the Marathon, Race Walking and soccer games. We've all been told to watch it on tv as spectators are now banned. Covid numbers are rising, with Tokyo daily numbers now over 1,000.
It's crazy hot here. I have a lot of quiet time since I gave up social media work for the tour company. I'm still nursing the weak Achilles tendon, but I can kayak and bike. So, I sit at home quietly a lot and read books! The library finally reopened after State of Emergency and I could get the books I ordered in May.
Sweat. Hot. Getting OFF the computer soon!
.........

This week Okaasan will have a small operation to insert a feeding tube "port" into her upper chest area.

Dear Son went into the hospital last week and had the doctor talk about it. He got to meet Okaasan briefly, and while she was still flat in bed - she was alert and seemed to know him. We asked the hospital to move a TV into her room, so at least she has the familiar sounds of tv shows and commercials.

Is this what she would have wanted? I'm pretty sure not.

Are we fooling ourselves making the distinction between tubes into stomach area vs tubes into chest area?

It's a whole subject that most people don't think about, or know about beyond end of life scenes in TV shows. Should we have said differently a week or two ago? Just left her on IV feed into the arm...to get weaker and fade away?

These decisions are so hard. And of course, most of us don't discuss this with family - who are left at stressful times to make choices and decisions. Hard to know what to do.

She's been on a tube into her arm for a few weeks now...now it'll be a tube into the chest area...

HOPING there is a coming stage of end of COVID restrictions to hospital visits, that we can get her into a nice facility...get her some meeting time...wheelchair to summer sunshine time...

Okaasan has gastric ulcers. Lots of them, all over the lining of her stomach. Little white/yellow spots and nodules here and there. The blood from her mouth in the past month has been when the ulcers pop.

No wonder she stopped eating.

A nice, human-friendly doctor at the hospital showed us the full-on color photographs of the inside of Okaasan's stomach - all pink and juicy - apart from the very obvious ulcer spots.

Kind of makes me wonder what on earth the big city hospital was looking at when he poked his probe camera down Okaasan's throat - damaging her pipes in the process - did he take the wrong turn and end up in a different part of her body??!! I'm a language teacher/writer/narrator and even I can see that these white/yellow spots around the stomach are not left over rice crackers.

So. We have an answer. Hooray!

Medicines and care should do the trick. They are getting SOME medicines into her mouth and down her throat naturally, but maybe not enough. They will try to get some food down there too, but will probably revert to the drip tube feeding...and the "port" hole just below her shoulder blades.

Time will tell. Perfect phrase for this situation. Wait and see.

Weird, random thought: I've seen inside Okaasan's brain - the scan at the mental hospital three years ago, and now I've seen inside her stomach. And Dear Son has seen far too much of his mum's rear end. Really, there are no privacy barriers left!

Finally got Dear Son to call the hospital and ask.

The nurse said Okaasan is brighter than on Monday and they may try to get her to eat something! Kind of doubt that is possible actually...more than two weeks she didn't swallow...is it possible to start again?

And the doctor has asked us to go in on Monday for a meeting. So there's that.

Meanwhile, a student to whom I was chatting about all of this reminded me: her father-in-law lived for FOUR years on drip feeding, in a bed, staring up at the ceiling.

Fours years! At the beginning he could communicate a bit, but the last 2 years plus, he basically just lay there and family members came and went. The tubes put nutrients into him, and others took waste away.

I started hunting around on the Internet about those Swiss clinics that'll assist in end of life - for me, I hasten to say. Not Okaasan. Of course, there is the added HUGE factor that I'll probably be in Japan, and a long way from Switzerland. I'd have to be healthy enough to get on a plane for Europe.

But I notice Oregon in the US has legalized assisted euthanasia for residents. I have a good friend in that state. I wondered if Dear Son would like to take me to Oregon to live and die.

Anyway. All of THAT exploded in my brain when I considered that poor Okaasan could spend years attached to tubes and staring at the celling.

We'll find out more on Monday, I guess.

Meanwhile, Hokkaido's State of Covid Emergency has ended. But the city of Sapporo (where we live) has moved to a slightly lower Alert Stage - which translates and gets abbreviated in Japanese into "Mambo"...making otherwise serious news broadcasts kind of funny.

It means that bars and restaurants can't serve alcohol, and must close by 8 pm...and I expect places like libraries and art galleries will stay closed? The city's COVID beds are at 79% capacity, with daily figures of deaths still mostly in double digits.

It also means that we maybe can't get into the hospital to visit Okaasan much.

Bear! Maybe It's appeared on your news - we had a bear running round in the northern suburbs of the city yesterday morning! It attacked and injured 4 people, and was eventually shot by hunters. 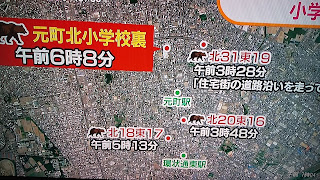 Even Hokkaido people were stunned. This is right in the city area, within the expressway ringroad and near subways stations, schools etc Usually bears appear in the forested areas and parks on the south and west sides of the city.
This was totally different. A 5-6 year old, male animal about 150 kg galloping along the streets, crashing thru gardens and panicked.
It attacked two elderly people from behind and pushed them to the ground. One of them it shook several times like a rag doll. At the local army base it was hurling itself at the gates, injuring the soldier inside - before breaking thru into the base.
I hate to see a wild animal like that. Panicked and totally out of its element. And then killed. We all wish there was a better way - to tranquilize it and set it free in the mountains. But the experts say it poses a future risk because it's already lost the natural fears of being near humans, and that a half tranquilized bear crashing round an urban area is even more dangerous.
I know. I get it. And what happened yesterday was at very dangerous level.
But. Still. 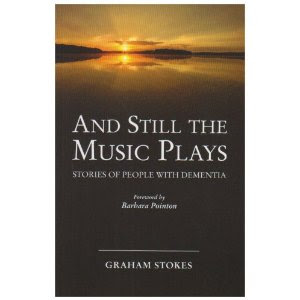 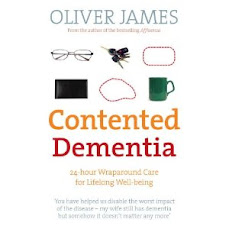